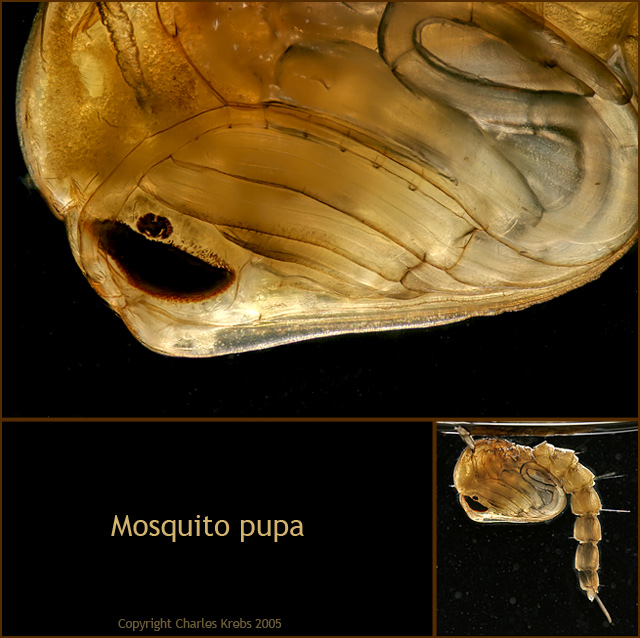 A bit of hyperbole it the subject header? But come on... would you have looked if I just called it "mosquito pupa?

This pupa was photographed in a small "tank" made from a slide and cover slip glued together with a small spacer between. The "microscope" was a strange thing that I got on ebay last year, which I have set up horizontally so I can photograph small aquatic creatures in a more "natural" orientation. I used a 10X Nikon CF Plan objective on extension tubes attached directly to the Canon 10D body. This was mounted to the microscope instead of the normal nose-piece and head. The large image is a combination from a stack of 10 using HF. Lighting was an electronic flash unit positioned behind the slide.
Last edited by Charles Krebs on Wed Apr 20, 2005 4:29 pm, edited 1 time in total.
Top

An incredibly good image Charlie, you continue to astonish me.
Kenv
Ken
Top

It's great to have you back!
Top

An interesting bit of information there Charlie, I never would have guessed such a thing. Makes my little ameba take a back seat when it comes to taking out populations. Extreamly good images you have here. I may have to do a segment on my web page about these critters, although I am currently covering the lotic ecosystems, they may apply somewhere along the line. Thanks for the post Charlie, good presentation.

Ken... I knew this subject header would draw you in..

Don't worry, your little amoebae cause the world plenty of grief too. And these gals are just the vectors, it's the little microorganisms that do the dirty work.
Top
Locked
5 posts • Page 1 of 1