It's a bit on the technical side, but if you're into moths, eyes, and stacking, you might like this little guy. 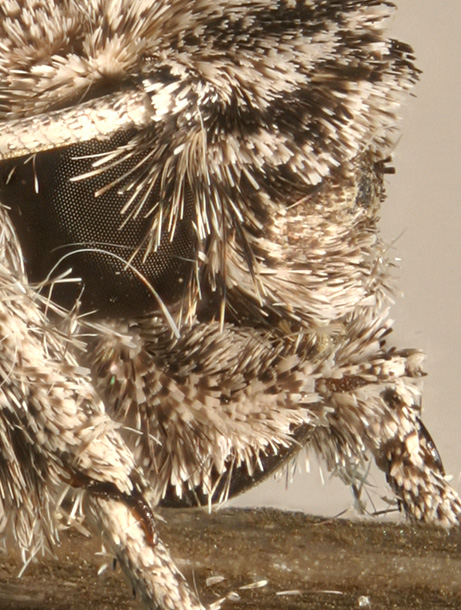 The above is a crop from a full frame that looks like this. 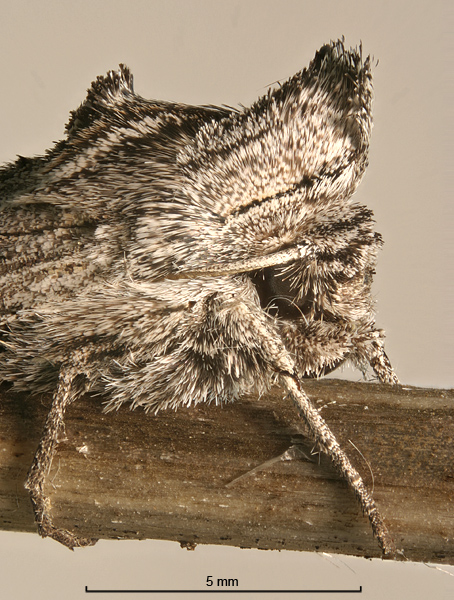 This was the cover photo for News of the Lepidopterists' Society, Summer 2005 issue. It's an illustration for my article there, "An Introduction to Extended Depth of Field Digital Photography".

Technical details on this image: "...constructed by CombineZ5 software from a stack of 48 individual pictures stepped in depth by 0.005 inch (0.127 mm). As shown by the crop, this image resolves the details of individual scales, over a total depth of more than 6 mm. Canon Digital Rebel camera with 55mm lens on bellows, reversed, at f/8 setting. The moth is an unidentified live noctuid in its daylight resting pose."

There's more info about lighting etc in the article.

These moths survive by imitating bark during the day. They can be incredibly cooperative about sitting still -- as long as you keep a light shining on them!

Speaking of strange anatomical features, check out the "claw" at the knee of each front leg. I have no idea what those are for. Didn't even know the moths had them, until I shot this picture.

Nice images. Looks like the claw is used to anchor themselves to the tree.
Sue Alden
Administrator
Repost of my images are welcome
Top

Interesting images Rik. They certainly seem to have a good way to conceal themselves. As for the claw, I would agree with Sue. Probably a way to anchor themselves.

Well, I have done some more poking around, but the tibial claws are still a mystery.

First off, I looked at a half-dozen other moths of similar general appearance. None of them had tibial claws.

Then I posted the question to my regional lepidopterists' group, but nobody has answered yet.

And finally I searched the internet as best I could, not knowing exactly what these things might be called. After some thrashing around, I found a reference in http://www.ndsu.edu/ndsu/ndmoths/glossary_h.htm that says "tibial claw: the fusion of two or more spiniform setae of the fore-tibia resulting in a large (often flattened claw-like) composite seta. Technically multi-cellular in origin, it is not homologous with a spur. Examples: fore-tibiae of Stiria rugifrons or Datana perspicua."

Stiria rugifrons is a noctuid (Lepidoptera:Noctuidae), but Datana perspicua is a prominent (Lepidoptera:Notodontidae). Neither of these moths looks remotely like what I photographed, but both families contain other species that do. When I wrote the caption, I thought I had a noctuid, but now I'm not so sure.

In any event, it seems that some moths have the claws, some more or less closely related moths don't, and I haven't found anything about what they're used for. Clinging during the day is certainly a possibility, though I have never seen one in a posture where they would be helpful. Perhaps they are used during emergence from the pupa, or some other specialized activity such as mating or egglaying.

Ah, the world is a complicated place...

I could image it could be used as a "perching security" to make perching more secure, just as you've mentioned Rik.
But thanks for the detail, and your photo is very detailed, right on the eye.

Erland wrote:...your photo is very detailed, right on the eye.

To fully appreciate the detail, it's best to look at the full frame from which the crop of the eye was taken (1447x1913 pixels). It's linked through the images in the online article, or you can go to the full frame directly.

In either case, you'll have to talk your browser into blowing up the image to be 100% with scrollbars, instead of shrinking it to fit the window. The method is browser specific.

In the full frame, you can see an impressive array of tarsal spines on the underside of the last few segments of the leg. These go along with a couple of sharp claws at the end of the feet. Given all this stuff, the extra fairly blunt tibial claw doesn't seem to add much stick-to-it capability, so I personally suspect some other use. But with no eye-witness reports of seeing them in action, who knows?
Top

Added to my favourites thanks. Great article.

All the best and very well done.

Nice Image nice stascking no artefacts to give it away.

Will have to have a look at the article when I have a minute, just trying to fix my PC after a little virus trouble

.
I must back up my Photos

Paul - Everywhere you look there is something to see.
My Gallery It's not much but it's Mine.
Top
Locked
8 posts • Page 1 of 1