Rummaging through some old files, I ran across this one that I thought might be of interest. 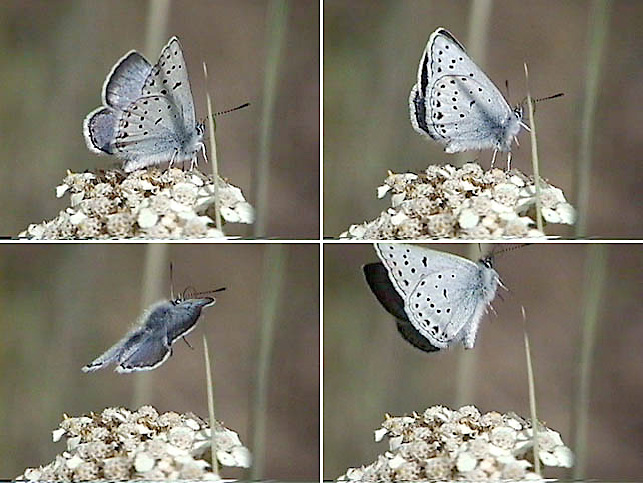 This is Plebejus saepiolus, the Greenish Blue butterfly. It is shown at takeoff after nectaring on yarrow (Achillea millefolium).

The four frames are in sequence, 1/60 second apart.

The image capture was done by analog video camera at its "high speed sports" shutter setting -- about 1/4000 second.

Analog video is often described as 30 frames per second, but it is actually 60 fields per second, each field consisting of just the odd- or even-numbered scan lines. By post-processing to separate the fields, one can effectively get low resolution snapshots (320x240 pixels) at 60 per second as shown here.

Just to tie some things together, this butterfly is a close relative of Icaricia lupini, whose egg is pictured in an earlier posting. The egg of saepiolus is similar to lupini's, but somewhat less finely structured.

Nice capture. Butterflies are so pretty, but difficult to photography in flight. Once they decide to leave...they are usually gone.
Sue Alden
Administrator
Repost of my images are welcome
Top

I ment to comment on this earlier this evening. I saw one that looked something like this one, this afternoon but didn't get a shot of it. Nice sequencing shots here Rik, very nice.

Congrats on an excellent sequence Rik. Very nicely done. Great timing and the lighting couldn't be better for this.

All the best Rik, excellent sequence.

Never seen a series like this before, excellent stuff.