Effect of lens aperture on DOF and resolution

Effect of lens aperture on DOF and resolution

In recent posts, there has been some discussion of the effect of lens aperture on depth-of-field and resolution (sharpness). Very briefly, stopping down your lens gives greater depth-of-field (DOF), but also makes your pictures fuzzier due to diffraction.

A few months ago, while preparing an article on extended-depth-of-field software, I put together some pictures to illustrate the tradeoff between sharpness and DOF. 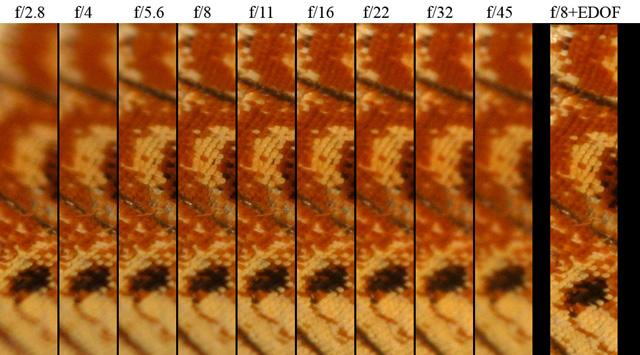 This series is shot with a Sigma 105 mm f/2.8 macro lens at 1:1, on a Canon Digital Rebel camera (22.2 x 14.8 mm sensor size). The subject is a Small Pearl-bordered Fritillary (Boloria selene), tipped at roughly 45 degrees to the optical axis.

If the goal is maximum detail, then the optimum aperture for this lens under these conditions is only around f/8-f/11. Stopping down farther results in progressively less detail. Resolution is obviously degraded even at f/16 and becomes worse with smaller apertures. At f/45 the image would be noticeably fuzzy even in a 4x6 inch print.

Extended-depth-of-field software, such as Helicon Focus and CombineZ5, allows high resolution to be achieved over great depths. The image labeled "f/8 + EDOF" results from compositing 35 frames spaced at 0.015 inches, resulting in a total depth of field of 0.525 inch (13.1 mm).

For further information, see the discussion and images posted at http://www.janrik.net/insects/ExtendedD ... deoff.html.

Very interesting, but you may find working with the effective f-number more interesting. You may find a correlation between that and maximim sharpness. Based on the information given, the effective focal length for your series is f/5.6, f/8.0, f/11, f/16, f/22, f/32, f/45, f/64, f/90. That would explain the loss of sharpness at the small apertures. Using effective apertures, the theoretical resolving power can easily be calculated. This would allow you to select the best aperture setting for different scales of reproduction.

It's good to hear from you -- I have admired your micro work for some time and have looked forward to talking with you.

You're right about the numbers, of course. But I had a very specific reason for quoting them the way I did, and also for presenting pictures without formulas.

The audience I'm targeting consists of people who don't understand diffraction, are under the impression that it's some exotic effect that probably doesn't matter to them, and think that "If only I can get enough light and stop way down, my depth-of-field problems will go away." My goals are to 1) convince those folks that the last two parts are just plain wrong, and 2) give them at least a bit of insight about how the tradeoffs work, to guide tests that I hope they'll do on their own.

For that audience, formulas aren't very helpful, and quoting effective apertures can be actively misleading. ("Ah, no problem -- my lens doesn't have anything close to f/90 marked on it!") So I went with just pictures and marked apertures. It may be worth noting that the Gibson and Kodak publications referenced on my web page took the same approach with aperture.

To somebody steeped in diffraction and capable of calculating theoretical resolving power, there is certainly no difficulty explaining the loss of sharpness at small apertures. In that aspect my pictures are completely consistent with the standard formulas. It's the folks who don't already know this stuff that I'm trying to reach.

Target audience aside, there are other good reasons for emphasizing pictures instead of calculations. The standard formulas do a good job of predicting resolution falloff with smaller apertures. But they do not capture the fact that resolution also falls off at large apertures (due to uncorrected lens aberrations) or that (for this particular lens) there is a systematic focus shift in which stopping down puts the region of sharpest focus primarily in back of the wide-open focus point. To get the most mileage out of this lens, it's important for me to know that there is a "sweet spot" around f/8-11 and that I'd better focus on the front of what I care about, not the middle or the back. Of course the formulas could be extended to capture these effects. (I make part of my living doing math like that.) But then there's the problem of how to determine the appropriate parameter values, and of course that would be done by taking some pictures. 35 years ago, when it took a long time to run tests, I did a lot of calculation to figure out what *should* work best. Now I mostly take test shots to find out what actually *does*.

At any rate, I will be very happy if I can help convince people that for critical work, they should think about opening their lens up instead of stopping it down. I recently started collaborating with a fellow who was habitually using his Canon 1-5X macro lens at 5X with marked f/16 (f/96 effective!), which is as small as that particular lens goes. I had him run an aperture test series, and he was quite surprised to see that f/16 was very fuzzy and f/11 was noticeably worse than f/8. (Marked f/5.6 was only slightly better than f/8, and it got worse for wider apertures.) Based on those results, he switched strategies and now whenever possible he shoots at f/8 and makes up the DOF with stacking. I count that as one success, and hope to get some more.