The wings of the "Sunset Moth" (Urania ripheus) are covered with a dazzling number of highly iridescent scales. Here are two images that show detail of two types of "solid" gold and red iridescent color. 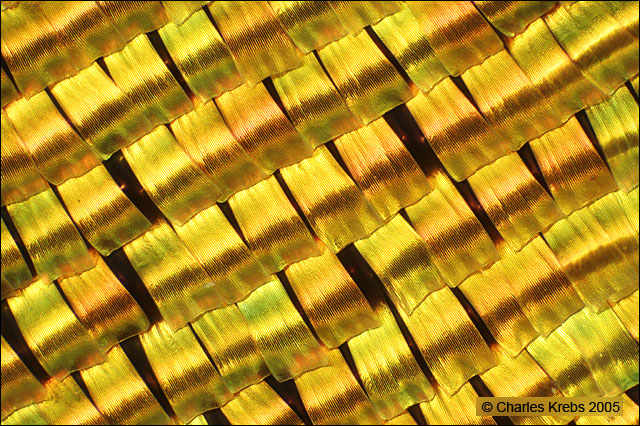 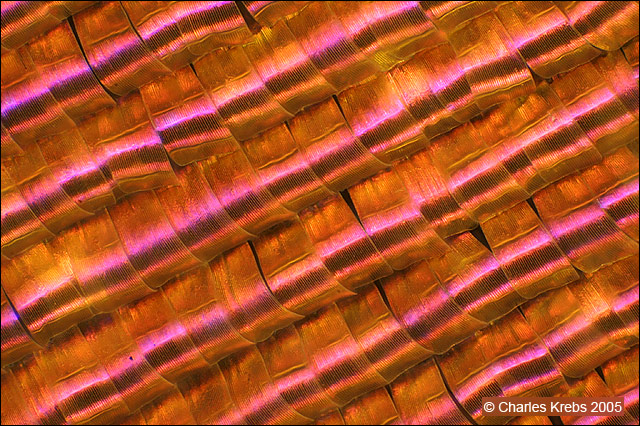 Words fail me. These images are just too good to compliment adequately in text and emoticons. Wow!

I notice once again that these metallic scales are curved and do not have serrated tips -- very different structure from the usual flat wing scales. In your experience is this typical, or are you selecting the oddballs to make these beautiful images?

You mention the 'diffusion dome' in several of the recent shots - is this something different from the empty film canister you mentioned previously? Perhaps from a PingPong ball?

Charlie I have said about all I can about your photographic expertise, however you have never let us down with your amazing images. Just keep them coming is all I ask my friend, excellent Charlie, just excellent.

Rik... on this Urania (and some others I've worked with) the iridescent scales are, as you observed, highly curved and lack the serrated end. The darker, non-iridescent scales have the familiar flattened shape with serrated ends. At first I wondered they might have "curled" due to the age of the specimen... but I have seen "flat" iridescent scales on other species. There also seems to be some advantages to the curved scales if you really want to be a flashy creature.

I've taken some pattern shots and others that include "normal" scales with the iridescent. The brightness range is HUGE, and it takes some work in PS (sometimes combining different exposures) to show any detail at all in the dark scales. Here you can see the difference. Also, note how the curved iridescent scales are able to show more than one color, and probably display iridescence over a much larger viewing angle than a flat scale would. (And I wonder if serrated edges would be undesireable as they might "carve" through other scales as the wing flexes in flight) 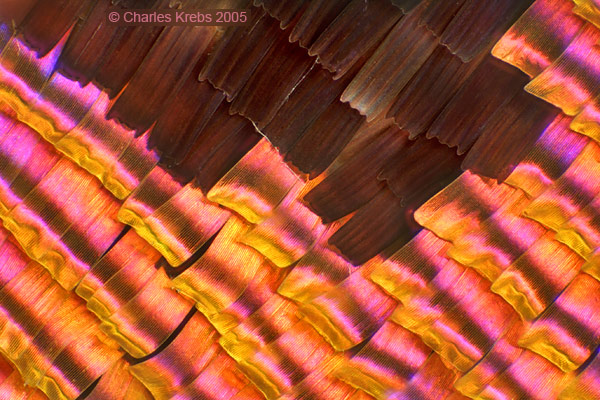 Mike... by "diffusion dome" I mean anything that pretty much surrounds the subject and diffuses the light as it passes through. The ping-pong ball, the Fuji film container, the small plastic hemisphere I described in another post all do pretty much the same thing. Actually, diffused light is not normally recommended for "micro" subjects, but I find it essential with these scales and other "metallic" subjects (such as http://www.photomacrography1.net/forum/ ... .php?t=452 and
http://www.photomacrography1.net/forum/ ... php?t=1037
Otherwise you get very hard specular highlights and see very little of the color.
Top
Locked
5 posts • Page 1 of 1