About two weeks ago I posted some shots of the iridescent wing scales of the Sunset moth. I finally got some "scope" time again, and went right back to the Urania wings. They are just spectacular to see. Combined image stacks (Helicon) in both cases. The top image is a 3X objective, the bottom a 10X. This is a recent specimen, and the scales look identical to the one I had photographed earlier (that one was over 20 years old)... so I guess the strongly curved shape is normal. 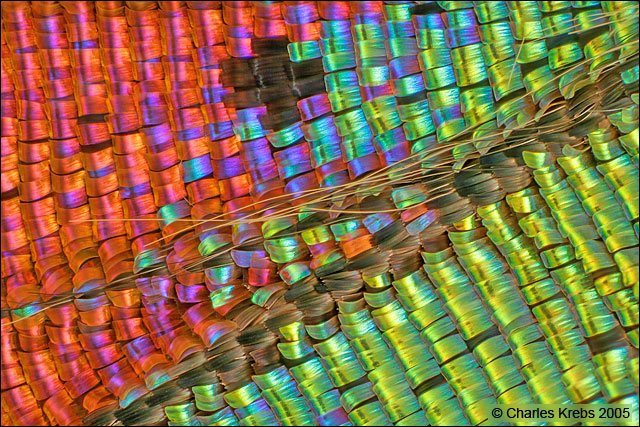 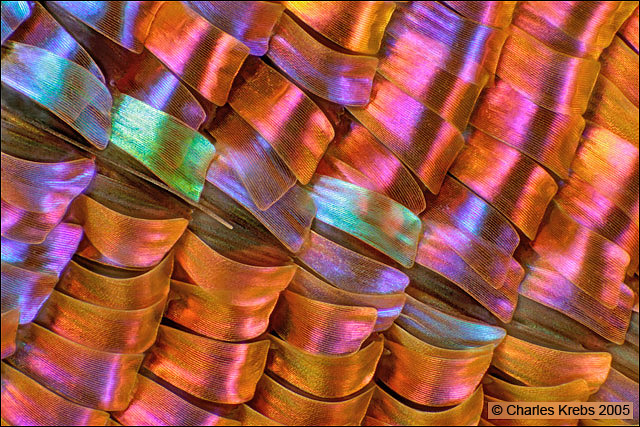 Ah, now this is just superb!

And I see a new aspect that I'm not sure I can even make out in your earlier photographs --- these scales are partially transparent! They remind me ever so much of fancy gift wrapping that is intended to dress up but not hide whatever is inside.

Thank you again for posting these pictures!!

I can find a little bit of description at http://www.microscopy-uk.org.uk/mag/art ... cales.html and some more at http://www.sdc.org.uk/pdf_features/DE00F1.PDF, but I confess that I don't really understand those yet.

The most colorful moth in the world, with the hindwing color of blue shifting as you change the angle of view into gold-green and then into gold and copper with bands of yellow. Here is the science of why the color is so unusual: it is a result of the scales covering the wing. Pigmented scales have submicroscopic structures varied enough to reflect different wavelengths of the light spectrum. Instead of a hollow scale, the Urania have scales of thin sheets held apart by rods. Mathematical calculations show in order for pure colors to be reflected, two sheets have to be counted as one. An increase in the number of sheets and variation in the distance between them plus the convex shape of the scale, cause reflection of different wavelengths at the same time, giving it a multicolored appearance.

Which still doesn't explain, of course, why the colors seem to be fairly constant for each scale. Are the scales pigmented also, in addition to the interference-caused iridescent component?

Charlie, what do these look like in transmission? For example are the strongly reddish-orange ones colored in brightfield also?

I'll get back to you on this Rik... but it will be a few days. Headed out for a brief trip. I haven't really photographed any in brightfield. I don't think there is much there in the way of pigment or color other than the brilliant iridescence.
Top

Charlie, I hope your trip is fun!

Thinking more about the pigment question, it might be equally or more informative to just wet the scales with something like alcohol. That should temporarily destroy the interference colors without affecting the pigments very much. If the scales are pigmented, but the pigments are confined to opaque granules instead of dispersed like a dye, then you wouldn't see colors in brightfield anyway. If the wing goes completely transparent when wet, that would pretty much nail the issue.

Rik... you probably thougth I had forgotten about your question, but only tonight did I have a chance to look at these scales again.

I scraped off a bunch of the strongly green iridescent scales and looked at them "dry" in incident light, and brightfield light. Then I added a drop of immersion oil and looked again. The only colors I could find dry appeared to be solely from the iridescence. Once the oil hit them there was no color to be found at all with brightfield, and just a hint of iridescent color with other lighting arrangements. In brightfield they just appeared a dull, semi-transparent dark brown. Not a very thorough examination, but no apparent pigment could be seen.
Top

Charlie, thanks for running the test. Results are not at all a surprise at this point. This problem has been running through my head for the last couple of weeks. At some point a thought gel'd that I think matches all the observations. Try a Google search on "photonic crystal" butterfly and see what all turns up. One of the interesting refs is to http://www.motionsystemdesign.com/full_ ... p?WID=6649. I bet the Urania are pulling the same trick, with different scales using a different size for the repeating structure to select different colors.

Rik... that's an interesting link. It is truly amazing how this all works.
Top
Locked
7 posts • Page 1 of 1