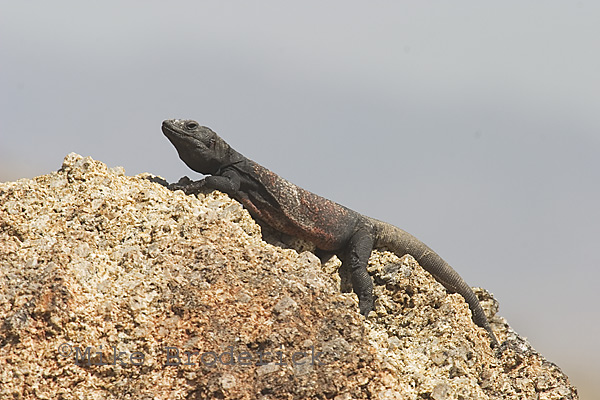 This is definitely not technically macro, but it is in keeping with the Lizards theme, so I'm pretty sure Danny won't send a squadron of Tuartas (spell?) to chew on my typing fingers!

This is a Chuckwalla. Except for the Gila Monster, they are the largest lizards in the US. Still not giants, usually less than 18 inches long. They are vegetarian lizards, but take time out from grazing to Sun themselves like this one is doing.

When threatened, Chuckwallas dash into crevices in rock, inhale and puff themselves up very large so that they are jammed against the crevice walls and can't be pulled out by predators. According to a guidebook, American Indian hunters would take advantage of this by letting the lizard run into a crevice, puff itself up, then reach in with a strong sharp-pointed stick and "pop the balloon". The Chuckwalla was then easy to pull out!

As I approached this fellow, when I got too close he would pump his front up and down in the "I'm the boss here" pushup behavior so many lizards have. I'd pause and wait awhile, then move a bit closer. When I was as close as I wanted to be, I stopped advancing, and he stopped doing pushups. I wanted to photograph him doing the pushups, but didn't want to go closer, I was afraid he'd run off. He didn't do anymore pushups, but after thinking on it for a bit, I grabbed my hat and pumped it up and down off my head. Sure enough, the lizard responded with his own pushups! I was so surprised it worked that I was slow in getting my shots off the first time. But I did it a couple of more times till I got the photos I wanted, then carefully walked off. Leaving the lizard very smug about showing up that big intruder, I'm sure!

Interesting. If I were to do push ups to show I am boss, someone would probably kick me in the ribs while I am down there. Good comentary Mike and photo.

LOL, so thats the true meaning of hat-trick or should that be hat trick.

They are very powerful looking creatures the lizards and reptiles. They always look so daunting and proud. Well taken here Mike, very well taken. The ground / crest in this shot, is the perfect setting for this and against the sky. EXCELLENT !!

All the best Mike, fine work.

Beautiful Mike! They are fun to watch doing the pushups. I thought it was some sort of mating ritual

since I seen them do it in April and they had all those colors flashing about.-
Sue Alden
Administrator
Repost of my images are welcome
Top

So would that be Lizardoooos Mike ??