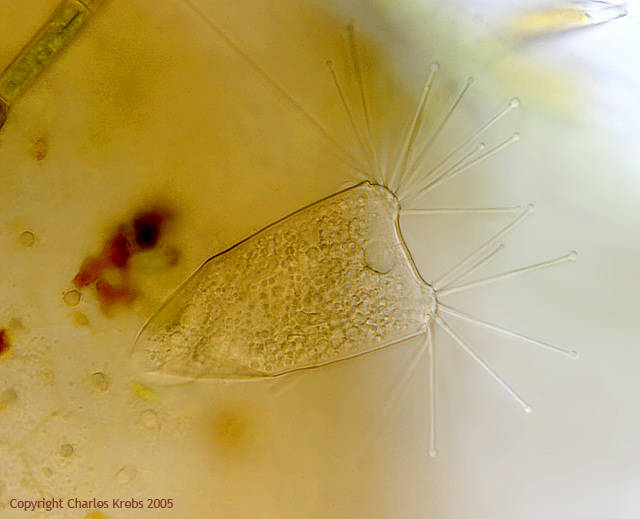 Acineta is a suctorian ciliate. (Although there are no cilia in this stage. The larval stage does have cilia). At the end of each "arm" is a mouth, capable of sucking the cytoplasm from it's prey. The tip of each "arm" is slightly bulbous, as it contains the extrusomes used to catch it's victim. These are quite interesting, and I look forward to eventually finding one with captured prey. This one had attached itself to the surface of a large egg, that was in turn attached to a duckweed root.


Now for some serious conjecture! I happened to notice some striking similarities to another well known creature! What do you think?

And I have seen these Suctorians in marine water too! so as in the cartoon the biological details are correct!

If you folks heard me laughing. I apologize. I was still grinning from having a look at Charlie's peritrich twins (which for some strange reason I found to be comical) when I saw Sponge Bob and almost fell off my chair. I'll try to behave myself in the future.
Bill Dembowski
"It's alive .... It's alive !!!!
Top
Locked
3 posts • Page 1 of 1