Awhile ago, Rik and I had a small digression about problems of shooting at small f/stop (high number, in other words) at high magnification. It was here:

I went ahead and located the original RAW file of the harvester ant shot I linked to in that discussion. The diffraction was even worse than I remembered. Here's a 100% crop: 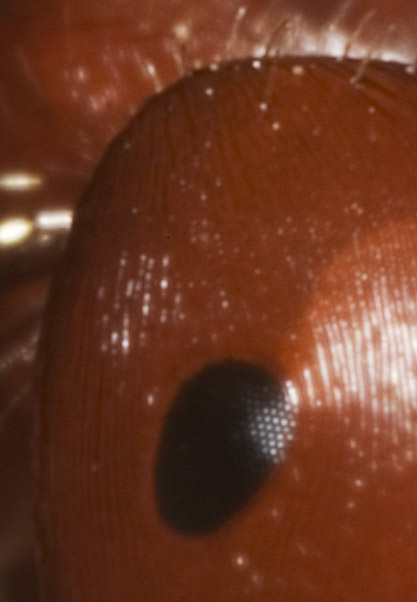 Looks pretty blurry! I didn't expect it to be this bad--I hadn't looked at the 100% version probably in a year, and this looks very good in the 8 1/2 by 11 inch print I've made from this shot. Before judging it too harshly, I need to remember that we're looking at the grooves and hairs on the head of an ant! This was with a Canon 1Ds (pretty high resolution for a 35mm camera, even if it is the "old" Mark 1 version). It was shot at an effective f/96 because of the magnification's effect on f/stop!

For a comparison of what it can do at lesser f/stops, here is a 100% crop at about f/32 with the same lens (this was at about 3x rather than 5x, so the comparisonisn't as precise as would be perfect): 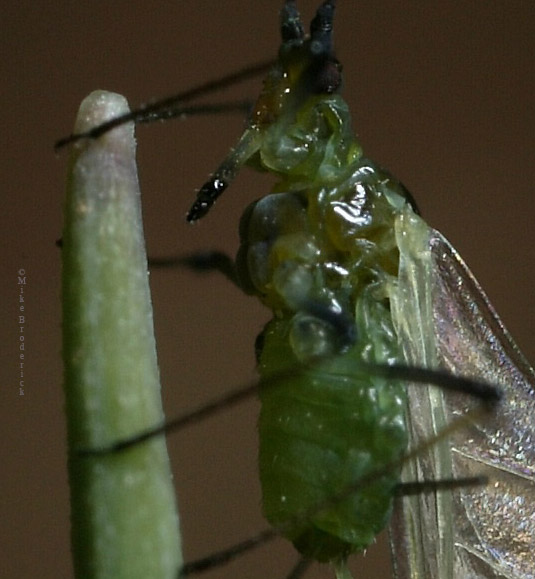 I'd like to show an example from this lens (the Canon MP-E-65 at a much larger aperture, but I don't have any shots! I'll try to get some when bug season starts in Oklahoma in a month or two.

For most lenses, diffraction is assumed to start becoming a major problem at about f/16, but some lenses handle it better than others. This link is to a 100% crop of a shot taken at an estimated effective f/55 (f/22 shown in camera data, but about 1.7 or so magnification.

Its something I'm now getting used to Mike. Even when shooting with 35mm, I ended up generally shooting stopped right down, F/22 - F/32 was normal for me. I haven't changed and it still shows up in my shots with the CD-1000 and the FZ10. Its not as larger problem as I get with CA. Obviously caused by the number of elements I have when stacked with lenses.

Interesting is the game of optics Mike. F/8 I've seen proved on many lenses over the years. Klaus had a fascinating page on his site with all sorts of macro lenses, even the wired and strange. I'll see if I can dig the link out M8t.

All the best Mike and IMHO, not bad eye detail at all

The whole issue of sharpness and DOF took me a long time to get my head around, its a sliding scale that moves in every direction - limited by: lens quality, aperture, D.O.F, stability of camera AND subject, shutter speed, flash duration, mirror slap, film grain / noise & probably some other stuff to boot! its a wonder anything comes out ok

Diffraction limiting is very noticable when using tubes or the MPE - The best description I have been given is: imagine a cone of light coming down through the aperture - if the film plane is close to the aperture then the cone is fairly narrow, if the film plane is further away from the aperture the cone is wider. The cone represents the light travelling straight past the aperture in the centre & being diffracted away on each side - the smaller the hole the wider the diffraction. The wider the cone the less tightly drawn the information - less l/pm - less sharp! It is a wet enogh weekend to do up some demos:

Some actual pics to display the change - you might need to click them to resize or somthing?:

At 5X it is sharp by F4 (almost zero DOF) and good to F8 but pretty much gone thereafter - at F16 there is much greater DOF but it is all unsharp!:

So - F8 & be there dosent quite hold out, but its not bad advice. Stop your lens down to widen DOF & avoid the widest extremes of the glass (often where the correction gives out) But if you are using extension don't go all the way to minimum aperture. Test your own lenses using a tripod (pref remote release M.L.U flash etc) & see how your gear performs, it is surprising how much sharper F16 can be than F22 for example.

Any comments or discussion greatly appreciated - flame away!!

The head and eye of an aphid and the diffraction went completely haywire. Too much glass and combined F/stops could well be a little too much

No flames offered here. Offhand your model looks helpful. I'd have to work with it for a while to see where it works well and where it starts to break down. (Every simple model breaks down somewhere.

Yeah, DOF is complicated. The major effects are all explained by ray cones and diffraction, but even with just those two, it's hard to make sense of the interactions. Throw in lens aberrations, and it gets harder. Fortunately with digital cameras we no longer have to also consider emulsion thickness, film grain, and multiple layers of optics like we did with film and enlarging.

I don't have time today to try wordsmithing yet another discussion, but maybe it'll help if I point you to some of my earlier postings in these forums and elsewhere.

"Effect of lens aperture on DOF and resolution" Basic illustration, using a Sigma 105mm at 1:1 from f/2.8 to f/45, plus "f/8+EDOF" using extended depth of field software.

"Effect of Aperture on Single Frame Depth-of-Field and Resolution". Like the above, with a bit more explanation and bigger images.

http://www.photomacrography1.net/forum/ ... 6&start=27 This thread's title is "I could use some advice..." It's a long thread discussing the effects of sensor size. The provided link is to a fairly late posting that I hope starts to pull together a helpful summary of the interactions between magnification, sensor size, f/number, required resolution, and maximum achievable DOF. A key result is that maximum achievable DOF depends only on total magnification, but the f/stop needed to get that DOF depends on sensor size too.

"Some Investigations Regarding Depth of Field (DOF). This working paper was prompted by early postings in "I could use some advice..." It looks at DOF from a different angle (pardon the pun) than the usual algebraic formulas. It proposes the rule of thumb that "DOF depends only on the angle subtended by the lens, as seen from the subject." This paper explicitly does not include the effects of diffraction -- those effects are added in the posting above. But it turns out that the rule of thumb extends fairly nicely to cover diffraction as well -- it's just that when diffraction becomes important, narrowing the angle starts to kill your resolution.

"Theory of the "No-Parallax" Point in Panorama Photography" This paper has fairly limited connection to macro work, but it does discuss at length some of the more, um, unexpected and counterintuitive effects of aperture placement in an optical system. This paper (more precisely the work behind it) resolved literally years of confusion by myself and others in the Panorama Tools community. The exercise of working it up caused me to learn way more about optics than I had known before. I have no idea whether this paper will be useful to any other photomacrography folks. (Let me know if it is.)

"An Introduction to Extended Depth of Field Digital Photography" Article published in the Lepidopterists' Society Newsletter.

"How Many Beetles Can You Get On The Head Of A Match" and "Printed Circuit Board Vista". These threads started by George Dingwall show and discuss several iterations of applying extended depth of field techniques to a couple of interesting subjects.

Trying to summarize key points about DOF in just a few sentences...
1. At high magnifications, it's easy for an aperture to be too small.
2. The formulas are good guides for what f/stop is "too small".
3. The formulas are not always good guides for what f/stop is optimum. At high magnification, the formulas tend to predict apertures that are too wide because they ignore lens aberrations. You have to test with your own equipment.
4. If you want much more DOF, you have to stack -- shoot multiple frames stepping focus, and put them together afterward. There are now several good, cheap, software packages to do this.

The head and eye of an aphid and the diffraction went completely haywire. Too much glass and combined F/stops could well be a little too much

Combined F/stops are probably not a factor here. Diffraction effects are determined by the angle of the ray cones, and that angle is normally determined by just one aperture. (Other apertures mainly cause vignetting. There are some weird second order effects that can result from multiple apertures, but I doubt that they are important in your setup here.)

More glass often introduces more aberrations, especially using lenses in ways they were not designed for -- as we macroholics are so fond of doing.

I can't really tell whether that's happening here, but actually I would be surprised if it were not.

Diffraction, hhmmm, let's see. Your picture is what, maybe 3mm across the field? You're at full digital zoom. So, we're looking at like 1:1 onto your small sensor, with a total magnification of roughly 50 (on my screen). To get a good crisp print (7 lines/mm), one standard formula would say nominal f/stop = 220/(Mtot+Menl) = 220/(50+50) = f/2.2. You're running at f/16 nominal lens setting. (I'm presuming it's the front lens that's establishing the angle of the ray cones.) So from these pretty crude estimates, we might expect that you're going to get something like 1 line/mm resolution, and that seems pretty much in the ballpark.

If you wanted it to be really crisp, you'd have to open up a lot wider, using good optics like microscope objectives that will support that, and then you'd have to stack to get usable DOF. Charlie Krebs is a master at this -- revisit his "Something for the aphid lovers" for illustration.

Well this is getting darned interesting for sure Rik. Quite a few of Charlie's shots I have in a guest gallery and they are superb for sure

, something to strive for but probably not with camera lenses and no stacking. Charles Chein and Mark Plonsky would come close in DSLR terms but not those huge ratios Charlie gets with stacked images under the scope. He's in a league of his own

I'll have to do tests on my digital cameras, another good exercise.

All the best and fascinating subject.