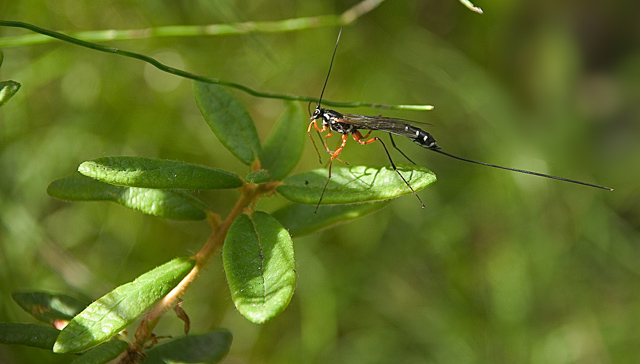 This is a large ichneumon wasp. The larvae of ichneumon wasps are parasitoids of other insects. Typically there's only one larva per host, but even so, it must take a large host to support this beast, which is nearly 3" long from eyes to ovipositor tip.

The ovipositor is that long "stinger" sticking straight back, longer than the body. It's actually a pretty complicated assembly of parts -- some for boring and some for passing an egg, with chemical and tactile sensors thrown in to make sure the process is productive. Wikipedia has a good article on these things, and you can find hordes more info with Google.

This was a grab shot while on vacation last summer near Banff, Alberta. Canon 300D, Sigma 18-125mm zoom at 125mm, f/5.6, natural light. I consider this lens to be a bit unkind to OOF backgrounds. Its bokeh is such that every sharp feature turns into a large but fairly hard-edged "blur", leading to a background that some people (me, for example!) find to be a troublesome texture -- like there's detail deliberately hiding back there.

Most of the time, I'm pretty tolerant of backgrounds, but this one really annoyed me. I thought I'd see if I could fix the problem, and in rather short order, here's what I ended up with. 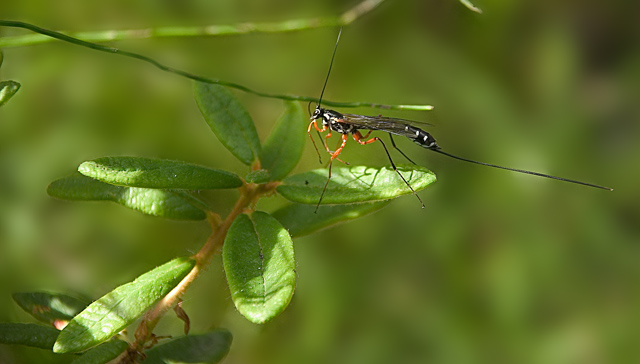 What do you think, improvement or not?

Ichneumon wasps are so hard to photograph; always on the move. My hat off to you for obtaining this image

It's amazing how important bokeh is to the appearance of an image. I'm looking to make major cjanges to my photography kit next month and I am evaluating the lenses I will be purchasing as much on the bokeh as I am on other characteristics of the lenses. Yes, what you have done here is a major improvement. However, I find the long vine stem (?) just above the wasp to be more disturbing than the bokeh. If you could carefully clone out that stem the image would be all the more stronger for having done so.

So that is what bokeh is. Wondered what some of you folks were talking about.

twebster wrote:However, I find the long vine stem (?) just above the wasp to be more disturbing than the bokeh.

Good idea. That thing was bothering me too. 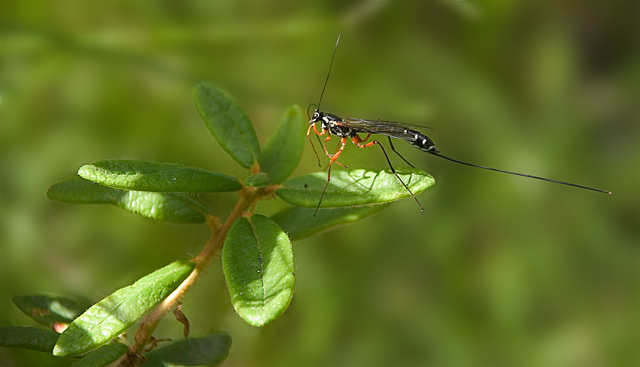 I didn't have to clone it out, though. I just did a little mask editing to expose its blurred version, like the rest of the far background. I did have to do a bit of clone and levels work on the end of the upper leaf, first to get rid of the stem (it's a horsetail, by the way, Equisetum) and then to separate the leaf from the background

Actually I didn't crop the left, I just edited the mask to expose the blurred version of those leaves also. Essentially un-did some of the work I did initially to keep them sharp. I did play a bit with a crop, but then some of the big leaves that I wanted to keep, started getting cramped by the edge of the picture.

I agree, the third version beats the original hands-down. While I'm editing this reply, my browser shows the two of them right next to each other, and the original is actually kind of painful to look at. Interesting. I never messed around in this direction before.

The difference between the first and the last image is astonishing! Nice work Rik on both, the capture and the photoshop work. These are interesting insects. I’m not sure but I think this one:

belongs to the same family (Focal plane is mis-placed quite a bit in this image, sorry)

Best,
Sven
If you are out there shooting, things will happen for you. If you're not out there, you'll only hear about it. - Jay Maisel
Top

I'm pretty sure that your beast is a "digger wasp" (Hymenoptera:Sphecidae) possibly genus Ammophila. See http://bugguide.net/node/view/2939/bgimage and http://www.insects.org/entophiles/hymen ... e_001.html. The Sphecids are active hunters that paralyze their prey and bring it back to a nest for the larvae to feed on. The adults are often found on flowers. The Ichneumons (Hymenoptera:Ichneumonidae) are parasitoids that leave their hosts fully functional until the wasp larvae are full grown and no longer need to eat. I don't know what adult Ichneumons eat. I don't recall seeing them on flowers. It's interesting that only one of Bugguide's pictures shows an Ichneumon on a flower, while about half of their Sphecid pictures are on flowers.

Thanks for the compliments on my work. I'm still surprised at how much better the picture got, just by making stuff fuzzy. I'm usually struggling so hard to get stuff sharp that the benefits of fuzzy had escaped my attention.

There's a lesson in here someplace. In conventional photography, it's kind of tricky to get rid of irrelevant stuff because you have to clone in believable substitutes that are probably sharp enough to see the details. But in macro, so much stuff is fuzzy so much of the time, more fuzzy just fits right it. It's much easier in macro. I'll have to play around some more with this trick.

That last image is excellent. Strange looking little guy with that long tail, but you did an excellent job in photographing him.
Sue Alden
Administrator
Repost of my images are welcome
Top
Locked
10 posts • Page 1 of 1