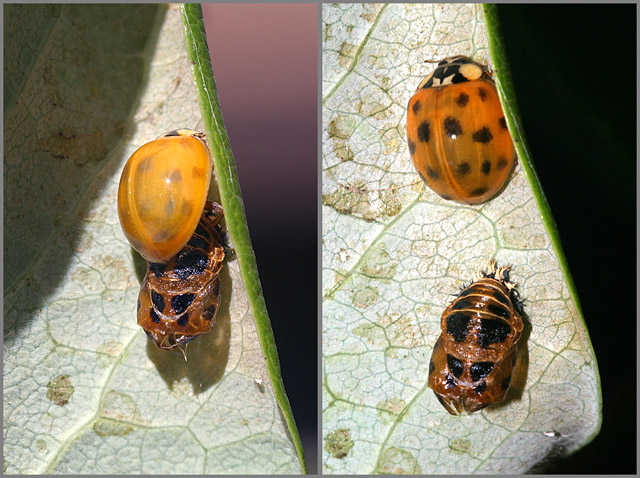 This is the same beetle, about 3 hours difference between the pictures.

Like many insects, lady beetles emerge from the pupa showing only a hint of their final colors and patterning. The colors develop as the adult hardens.

That's the beetle's old pupal skin hanging head down below the beetle. The adult had already hardened up quite a bit by the time I found it, but it was not at all eager to move. It did eventually move a centimeter or two after I handled the leaf to get the first shot, but it went right back near the pupal skin when I left it alone. I have no idea why it would do that, or even whether it's typical behavior.

Most certainly is odd behavior Rik, I wonder why myself it would return to the shuck. I have often seen lady bugs with pale markings, now I know why. Thanks Rik

Thats interesting and a good find there Rik. I did not know they would do that

Sue Alden
Administrator
Repost of my images are welcome
Top

Very nice life cycle shots Rik. I do not think I have ever seen this in a photo before. Thank you
Take Nothing but Pictures--Leave Nothing but Footprints.
Doug Breda
Canon PowerShot S1 IS with Canon 250D closeup lens
Top

Many newly hatched insects will eat a shed skin to retrieve nutrients and as a first meal. Eeeeeeewwww

Nice images, Rik. The elytra remain a bit flexible to make it easier for the beetles to hatch. Once the beetle has emerged from the pupa, the elytra start to harden from contact with the air. Cool

Best regards as always, my friends.

Nice shots rik. This kind of destroys one of the myths about ladybugs, that the dots represent the age.
Carl B. Constantine
http://photo-op.ca/
Top

twebster wrote:The elytra remain a bit flexible to make it easier for the beetles to hatch. Once the beetle has emerged from the pupa, the elytra start to harden from contact with the air.

People who are new to insect metamorphosis may not appreciate exactly what "a bit flexible" really means.

In fact, when a beetle emerges from its pupal shell, its membranous wings and its armored wing covers (the elytra) are all quite soft and are shrunken like collapsed mylar balloons. Just like a butterfly's wings, a beetle's wings and wing covers have to be expanded several times larger before they harden.

To illustrate what happens, I have added to the montage two pictures of a lady beetle pupa. The blue overlay shows corresponding areas occupied by one wing cover, before and after emergence. Yep, the pictures are all to the same scale. I think the process is impressive, to say the least. 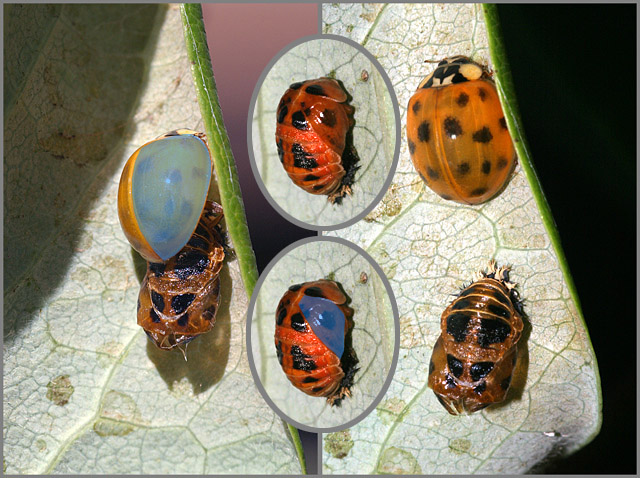 
Many newly hatched insects will eat a shed skin to retrieve nutrients and as a first meal. Eeeeeeewwww

This is definitly off topic but cows will do the same thing with afterbirth. The reason here is to keep predators from getting wind of it and to keep them away from the new born calf.

Now after having grossed everyone out, that composite of the lady bug is really neat!

It's gonna take more than that to gross me out, Ken. I have not only lived through afterbirth, I have family stories regarding what dogs do with it, and the relationship between that and cheese samplers and chocolate mayonnaise cakes. Despite being as bizarre as you might imagine, those stories pale in comparison to what these small beetles go through as part of their normal life cycle.

I'm glad you like the composite. I've watched insects do their tricks so much that sometimes I forget to be astonished. The composite reminds me, too.