Edited to add: the whole trigger mechanism is shown in more detail at https://www.photomacrography1.net/forum/viewtopic.php?t=5112 .

Somehow this seems more appropriate over here in the micro forum.

What's pictured here is half of the trigger mechanism of a click beetle, shown here at about 270X. This is the piece that projects from the mesothorax, mating with the prong on the prothorax. You can see in this view that there is a fairly well defined lip on the front of the projection. I'm pretty sure, from real-time observation, that this lip mates with a corresponding lip on the prothoracic prong, allowing the beetle to exert great pressure on the mated pair before firing the trigger by releasing the prong.

This picture, and numerous others like it that I'm not showing you, were a great revelation to me. I had thought, from direct observation through a dissecting scope, that this projection was divided by a longitudinal fissure. Obviously not so! I'm not sure what the problem with the dissecting scope view was. I guess I'll have to go back and figure that out.

This image is cropped from a Canon 300D, shot with an Edmund's generic 20X NA 0.4 objective projecting directly onto the camera's sensor. The objective is a basic achromat, giving 3.3mm working distance so I could light the subject externally instead of through-the-lens. The objective is designed to be used with a standard cover slip; I'm using it without one. What's shown here is just the green channel. There was some problem with ghosting in the red channel, and the blue channel didn't seem to add any detail. Stacked using Helicon Focus, with a 0.0002" = 5 micron focus step.

I'm pretty pleased with this image, but I'd be interested in whatever thoughts cross your minds.

PS. Charlie, this is using a ping-pong ball and fiber illuminator. Thanks for the advice!
Top


You should be pleased with this shot! Excellent definition - very well done.

I'm interested in how you are doing this with the Canon 300D as I am currently working with a Nikon D200 trying to get direct projection onto the chip but my results are not satisfactory.

I've been using a setup very similar to Charlie's and have tried three different EPs, 2.0X and 4.0X Leitz Proj. EPs, and a Nikon CF Plan 3.5X EP. So far the only reasonable results have been with the Nikon EP, so obviously something isn't quite right.

Perhpas you could post a photo (or send it PM) of your setup?

Mike wrote:Perhpas you could post a photo (or send it PM) of your setup?

Here are a couple of snapshots of my setup for the click beetle shot.

I'm not sure what if anything in here might help you, so I'm just showing it all. Of course there's not that much to show!

The optics are dead simple: 20X objective on bellows in front of the Canon 300D, no eyepiece. The bellows is set for 150mm between objective flange and camera sensor, since I vaguely recall that's the actual image plane position for a nominal 160mm tube.

Most everything else is just mechanics. Machinist's mill table for focus, 2-axis rail plus mini ball-head for specimen positioning. In this case, I'm not actually using the ball-head -- the beetle is glued to a small strip of copper that's pinned into a balsa plate.

My biggest problems have been with vibration, mostly traceable to mirror and shutter. Those are under control now, since I firmed up the bellows-to-table mount and loaded the camera with firmware that does mirror lockup. I was misled several times by problems that appeared to be optical, e.g. with blurring that was radially symmetric instead of linear, but eventually turned out to be vibration. 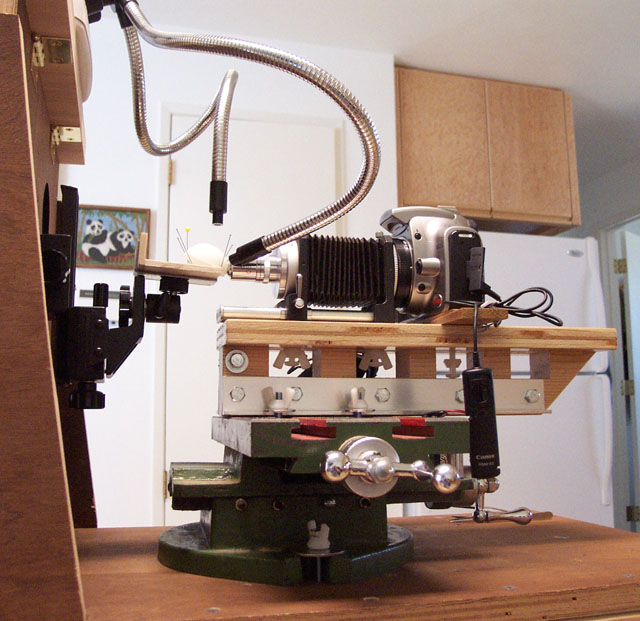 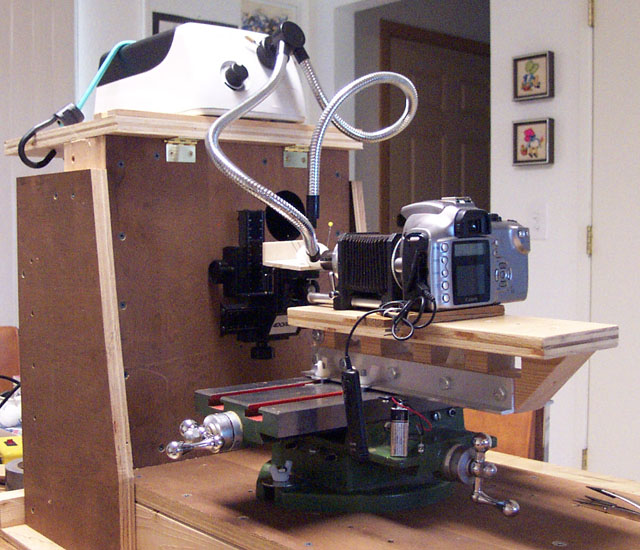 Re-work and reposts in this forum always welcome.
Top

You know the adage - 'a picture is worth a thousand words'!

Now I understand; I was trying to imagine how the Edmunds lens was being used in the context of a compound microscope frame/trinocular setup.

Very effective system and one I hope to try.

Thanks for sharing this.

Hi Rik,
I hope that bungee cord isn't there to prevent the illuminator from vibrating itself off of the platform

Nicely done. I have never thought of exploring the "clicking" mechanism now that I have the capability of doing so... although as a kid I certainly annoyed plenty of click beetles as I amused myself with this behavior.

Looks good as a b&w, almost a polished metal look. I doubt color would add any info... but what do you think the problem was with the red channel... the dreaded chromatic aberrations?
Top

Hi Rik--
That apparatus is a thing o'beauty. I will have to try it as well, since I have a tube "microscope" and the identical mill-drill table. Just one more adapter for the SLR. I find that I seem to spend almost as much time making adapters for things as actually taking pictures. Great image, I won't be looking at click beetles quite the same way now. How many shots did you stack for the final picture?

Charles Krebs wrote:I hope that bungee cord isn't there to prevent the illuminator from vibrating itself off of the platform

Nah, that's what the groove in the platform is for.

The bungee cord is so I can adjust the pipes without having to hold the illuminator down at the same time.


Looks good as a b&w, almost a polished metal look. I doubt color would add any info... but what do you think the problem was with the red channel... the dreaded chromatic aberrations?

Well, last night I didn't know what it was, and I wanted to go to bed worse than I wanted to figure it out. Tonight, I think the "ghost" in the red channel is actually a faithful capture of light that was channeled and focused inside the chitin shell. 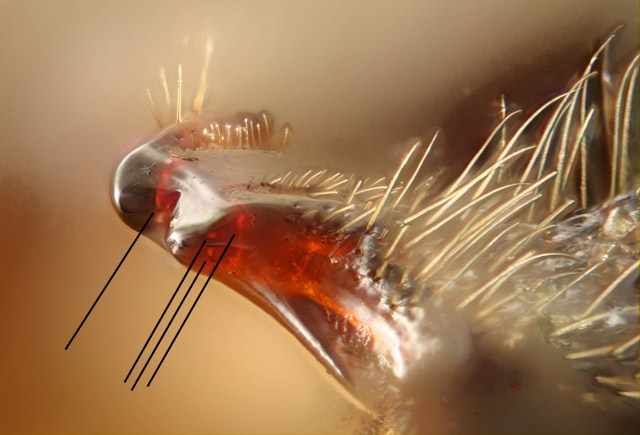 What I was most concerned about were the red arcs that I've marked. I had not seen such things in earlier shots with a different lens. They suddenly appeared when I switched to the 20X objective, which I had not used previously with lighting anything like this. In my haste and fuzziness last night, I noticed that the red arcs roughly mirrored the shape of highlights about a screen cm to their left, and latched onto the idea that somehow this was ghosting in the image system, strangely compounded by the stacking algorithm.

But rechecking the individual frames tonight, I see that that's a lousy explanation. The frames that are focused on the "ghost" show it as having very fine detail, almost like laser speckle, even though all the highlights in the same frames are fuzzy blobs.

So, new interpretation... The optics are fine. The red line "ghosts" are really there. They are formed by light bouncing and bending inside the chitin, and they're intense red because that's what the chitin lets through.

The objective does have some CA, but it cancels pretty well with PTLens. The image above has gone through PTLens. It's full-frame to the right and bottom, cropped a bit at left and top.

--Rik
Reworks and reposts of my images in this forum are always welcome, as are constructive critiques.
Top

discomorphella wrote:That apparatus is a thing o'beauty. I will have to try it as well, since I have a tube "microscope" and the identical mill-drill table. Just one more adapter for the SLR. I find that I seem to spend almost as much time making adapters for things as actually taking pictures. Great image, I won't be looking at click beetles quite the same way now. How many shots did you stack for the final picture?

I sympathize about the time. I've had many happy hours evolving that thing from its spartan beginnings shown near the bottom of http://www.janrik.net/insects/ExtendedDOF/index.html.

In its current incarnation, the apparatus also supports Charlie's backlighting (that's the black hole seen behind the light pipes), and the whole thing can be tipped up any amount from horizontal to near vertical for shooting things that I don't want to glue down, like the setscrews in http://www.photomacrography1.net/forum/ ... php?t=5046 and the jumping spider in http://www.photomacrography1.net/forum/ ... php?t=4901.

I really intended the device for macro. It's a happy coincidence that it works for higher magnifications too.

But it does make me a bit conflicted about the rules on that Nikon contest. Was this image shot through a microscope or not?

57 frames for the click beetle image, almost all needed. MicroscopyU quotes 5.8 microns DOF for 20X NA 0.4, and indeed most features are not sharp in two adjacent frames with the 5 micron step used here.

--Rik
Reworks and reposts of my images in this forum are always welcome, as are constructive critiques.
Top
Locked
8 posts • Page 1 of 1