Hey Rik, what's a "click beetle", and what's this "trigger mechanism" all about, anyway?

Those are the questions that a couple of my colleagues asked, when I sent them the link to my high-magnification image of half the trigger mechanism.

Hopefully this picture and these short videos will answer those questions.

In this picture, the yellow oval overlays the two-part trigger mechanism. The high-magnification image is of the lower projection, which is marked with the red line in this shot.

Orientation of this picture is beetle's head to the left, abdomen to the right, upside down. 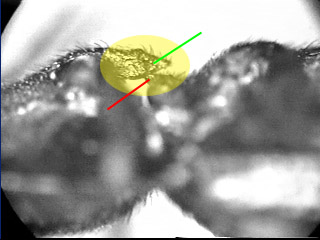 The videos are here. (I suggest to download them and play the files. I've had some trouble just clicking to run them directly from the site.)

You'll notice that the trigger locks up at the position shown in the still photo above. This holds the two halves of the thorax apart, while the beetle loads up some strong elastic tissues trying to pull them together.

The "click" happens when the beetle allows the two halves of the trigger mechanism to come loose and slide past each other. This causes the famous spine (green arrow) to slide into the equally famous groove (not visible here), as the beetle suddenly pops into an arc'd posture. But despite what most accounts kind of imply, the groove apparently has no function except to provide a place for the spine to go after it has been released. The trigger latch is provided by the spine (green arrow) hanging up on the end of the meso-thoracic projection (red arrow).

Equipment is Ken-A-Vision VideoFlex, Osprey-100 video capture card and basic Windows software. The whole beetle is just using near focus of the standard VideoFlex lens. The close-up is through the regular eyepiece of an aus Jena compound microscope with 3.2X objective.

PS. This is a different species from the high magnification shot. This one is much more black and robust.

Edit: to add MP4 version of 2nd video.
Last edited by rjlittlefield on Thu May 28, 2015 9:53 am, edited 1 time in total.
Reworks and reposts of my images in this forum are always welcome, as are constructive critiques.
Top

Seems as though I recall a site or something or another entitled "How Things Work." That last clip would be a good one for that. Quite interesting and informative Rik, probably something that some have wondered about but have never seen before. Ya did a great job on those.

Very interesting Rik! Some subjects were made for video it would seem.
Top
Locked
3 posts • Page 1 of 1