Aphids for breakfast, lunch and dinner...

Aphids for breakfast, lunch and dinner...

A cherry tree in my yard has some leaves that are curled up and infested with aphids. But the predators are moving in. I don't know what this larva is (likely a midge, fly or wasp of some kind) but there are now a goodly number mixed in with the aphids. The top shot gives an "overall" view of a larva. The middle image shows one selecting it's next meal. The final image shows a side view with a nearly "completed" aphid. 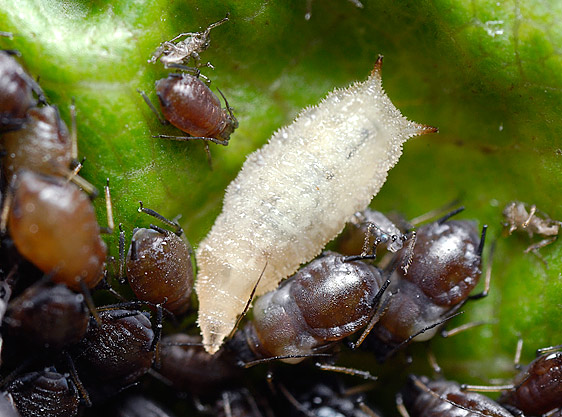 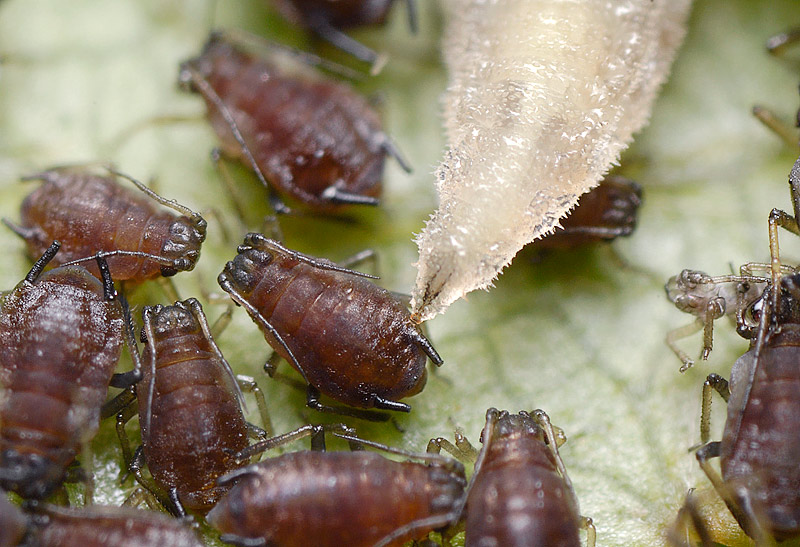 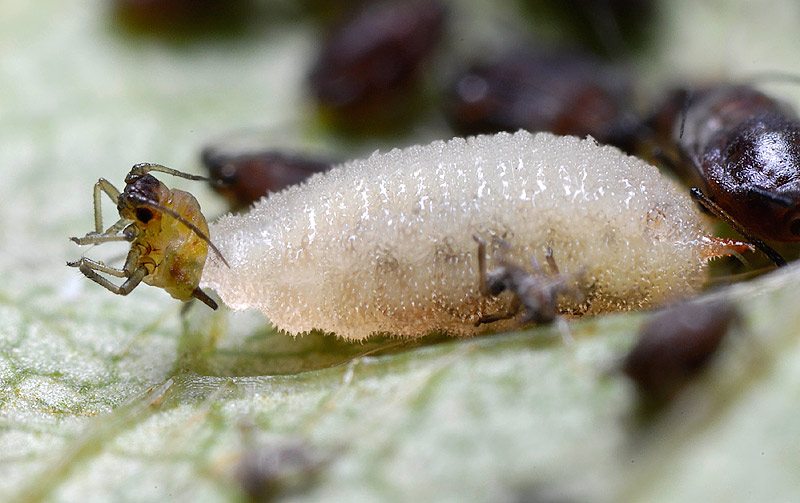 The aphids don't even seem to mind having a predator in their midst. I wonder if its one of those situations where the larva emits chemical scents that the aphids don't recognise as a threat?
Regards
Steve

Look at everything everyday. No, really. Look at EVERYTHING EVERYDAY.
The Real Meaning of Life!
Top

Wonderful images Charlie and quite informative.

That explains some of the empty aphid hulls I see from time to time.

Brings to mind and old horror film I once saw back in the sixties called, "The Brain Eaters." These things would sneak up behind you and attach themselves to the back of your head and suck out your brains.

Those old horror films were so entertaining back then, because they left something to your imagination.

Thank you Charles for showing us some of Lifes most dramatic moments which we would probably miss if it wasn`t for you and your macro & micro photographs.
Take Nothing but Pictures--Leave Nothing but Footprints.
Doug Breda
Canon PowerShot S1 IS with Canon 250D closeup lens
Top

Thanks guys!
Steve... I was actually going to mention the point you made. That was actually what I found most interesting in this scenario.

These larva were mixed right in the middle of the grouped aphids. The aphids would be nestled right up against them, sometimes even crawling over them as they devoured an aphid buddy. (See top photo in two shot panel below). There were a large number of ants "tending" the flock, and they too would walk right over them with no sense of alarm. (I observed the same ants go after a ladybug larva that threatened the aphids). I even wondered if the two protuberances at the butt-end of these larvae, (slightly mimicking an aphid), somehow contributed to it's apparent acceptance. The other thing that struck me was that when these larvae nosed around and found their next meal, the targeted aphid would continue to feed until it was actually being lifted off of it's feet. (Lower shot of the panel below). So while I don't expect any rapid evasive action from aphids (

), it was still interesting to see just how "accepted" these larvae were in their midst. 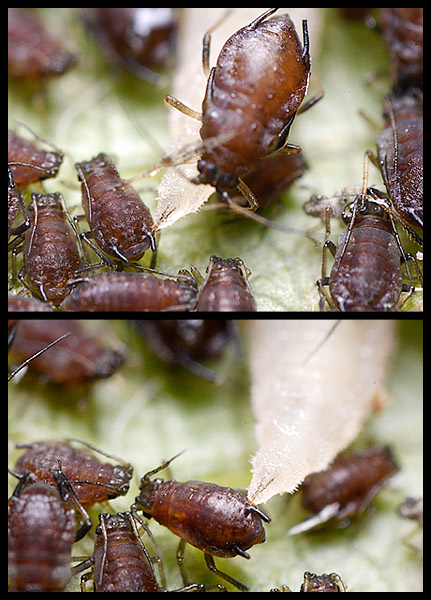