I have a question regarding the aperture value of a photographic lens:

Does anyone know, what the numerical value (e.g. f/2.8) means?
What is its physical meaning?
Is it true, that the projected image (in the film / CCD sensor plane) has a brightness of 1/2.8 of the surface brightness of the subject?
But this could only be true, if there are no f-stop numbers <1, because the image cannot be brighter than the subject which would violate the Second Law of Thermodynamics.
I ever heared about lenses with f/0.75, but I've never seen one, this is only a rumor.

Thanks in advance!
Top

Roughly speaking, f-numbers are computed as (focal length) divided by (apparent diameter of the aperture).

For simple lenses, the widest f-number is (focal length) divided by (diameter of front lens element). This is because wide open, the aperture appears to fill the lens.

The f-number does not relate easily to absolute image brightness, but it is a good indicator of relative brightness.

You are correct, it is not possible to make the image arbitrarily bright by building an arbitrarily wide lens. The f-number-squared relationship is fairly accurate for f-numbers found in practice, but it becomes inaccurate for very wide lenses.

Many articles use the term "entrance pupil". The entrance pupil is just the aperture, as seen through the front of the lens.

Thanks for your answer.
I have now read the article above.
Well, that gives some insight.
Actually, the reason why I asked this question is, I wanted to know how the typical photographic f-stops relate to the NA of a microscope objective lens.
And still about the absolute image brightness. Even if the relation is extremely complicated, can anyone roughly say, how bright the image of a typical lens is? Which order of magnitude? Comparably bright as the subject, or much, much less?
For microscopic lenses, I have in mind that the relative brightness is (NA/magnification)^2. That does make sense.
But again, absolute brightness? There comes the question, related to what? The brightnes of the actual specimen; or the field as seen through the condenser?
Thanks again!
Steffen
Top

Uh-oh, this has grown into another long response...sorry...

Regarding NA versus f-number...and assuming a dry objective...

Given aperture diameter d and focus distance f, we have the half-angle h = arctan((d/2)/f)).

For immersed lenses, the NA increases by the refractive index of the medium. That's how you get NA > 1.0 even though sin(h) < 1.

Your question about absolute image brightness is a bit tricky.

For starters, notice that I have carefully written "effective" in front of those formulas for NA and f-number.

The f-numbers that are stamped on camera lenses are measured from the standpoint of the film and are based on focusing at infinity.

Now, having not thought about this nearly enough, my gut feeling is that ignoring transmission losses and assuming dry lenses, the image brightness is just equal to the subject brightness * (film-side NA)^2.

In the microscope, at high magnification, this translates to be roughly your (NA/magnification)^2, assuming that by "NA" we mean the one stamped on the objective, which is from the standpoint of the subject not the film.

In the camera, focused at infinity, with relatively small apertures where sin(h) and tan(h) are roughly equal, we would have that image brightness = subject brightness / (2*(f-number))^2.

That would make the image of an f/4 lens be 1/64 as bright as the subject.

Make sense? (Caution, this math is all unchecked by anybody else and is not experimentally confirmed. Let me know if anything looks flaky.)

I was just wondering, could it be, that the image brightness is so much less than the brightness of the specimen? Well, 1/10000 is a bit pessimistic, as I have never seen a 10* objective with a NA of 0.1. A value of 0.3 would be more realistic, but still...

But probably it is true, and the human eye has a more-or-less logarithmic sensitivity, which makes things looking much brighter as they are in regard of e.g. a film.
Top

It is a bit tricky to confirm this number experimentally.

You could actually do this in a darkroom by switching the microscope illuminator. Use slow film, dim the illuminator, and maybe stick in some neutral density filters, until you get a light level sufficient to decently expose the slide plane film in 1/10 second or so (however short you can accurately time switching the illumination). Then put a piece of the same film in the image plane, and see how many tens or hundreds of seconds is required to get the same density.

But maybe just thinking about this experiment makes the big number seem more plausible. Try it with ground glass, and compare how bright is the light in the slide plane versus the image plane.

Yes, I have already prepared a photodiode which has a photo current proportional to the incident light intensity over many orders of magnitude. Will try soon.

For a first try, I used this tiny cute photodiode (BPW32): 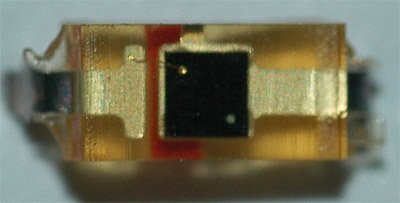 I reverse-biased it with 6.00V, and measured the current through it.
In a dark room, it showed 0 (on a digital instrument with 100nA resolution).

Put at the top of the condenser, I adjusted the brightness for a current of 25000nA.

Here, I have a bit more than 1:1000, but again, with an absolutely inadequate resolution, as the instrument could also have shown 100 or 300nA by just switching its lowest-valued digit by one.

Tomorrow, I'll build an op-amp circuit and use a BPW34 photodiode (larger area thus higher sensitivity), and repeat it.

At least, it shows, that the order of magnitude is right. The image is that much less bright.
Top

Awesome experiment -- I look forward to the next round!

BTW, thinking more about this problem, I realized that in my "gut feeling" I had implicitly assumed that the illumination was diffuse, NA=1. In a condenser system, it seems like the ratio will be decreased by the NA^2 of the condenser. So, if your condenser is precisely matched to the objective, the brightness ratio is probably just 1/magnification^2.

... this looks like someone is doing some SCIENCE on the forum... keep it up, this is fascinating stuff!

I have done the experiment again. With a much larger photodiode (BPW20R), and an op amp circuit with high gain. 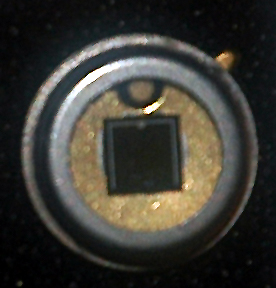 I used the same objective lens (4*, NA = 0.2).
The ratio I have measured now is about 1:722 (average of 5 measurements, all carefully done in an absolutely dark room by placing the photodiode in different positions; and all between 1:700 and 1:750). But anyway, there are still some flawns: Firstly, it's very difficult to put the diode exactly perpendicular to the outcoming light. So one has to "search" for a maximum by slightly varying the angle betrween diode sensor plane and optical axis.
A second problem is, that the spectral sensitivity of the diode is far from flat. So, if the spectral content of the light after passing the optics is different from that of the light at the top of the condenser, the result also needs correction. And I'm convinced, that reflection at the surfaces changes the spectral composition.
Anyway, I can see that there is a very low ratio of brightness of the image to specimen, and the formula given before always gave a lower limit. Never found more light, always less.
Top

Your results are consistent both with optical theory and with one of my favorite meta-theories about experiments in general:

"Good data is hard to get."

Thanks for reporting back.